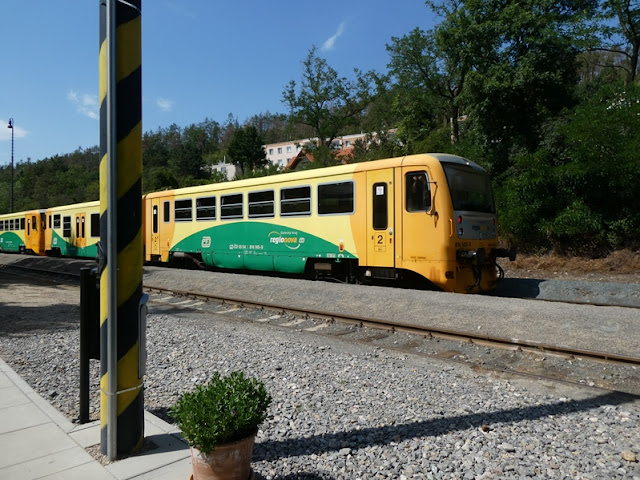 Most of our time in the Czech Republic was spent in Prague. One day, however, we ventured out of the city to Krivoklat Castle, in Central Bohemia. We purchased our train tickets at the main station, and found our way to the correct train. We knew, from reading Rick Steves guidebook, that we would change trains at Beroun, to the cute little diesel train seen above.

As our train curved and climbed through the hills and mountains, we saw people swimming in the river, lots of campsites, and green forests. At every stop, hikers and backpackers got on or off the train. Clearly, this area is well-used for recreation. 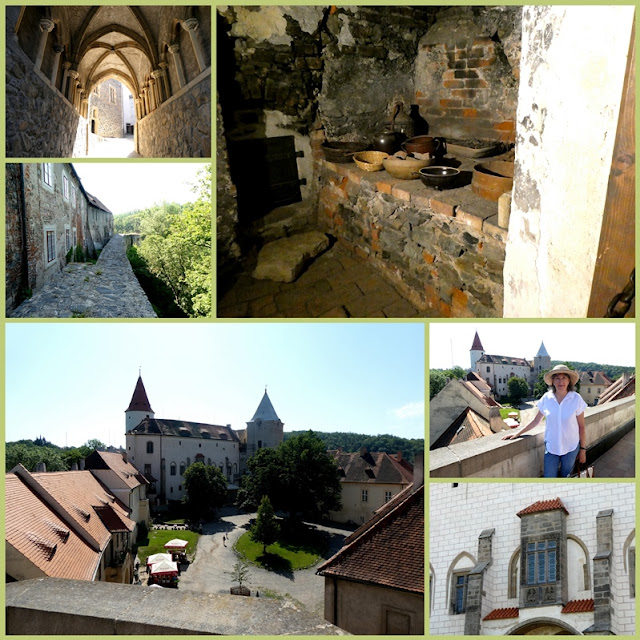 Krivoklat Castle was first built as a hunting lodge before the 13th century. The Gothic towers lend a fairy tale air which is enhanced by the castle's setting in a lush forest. Later, the castle was used for incarcerating prisoners. The top right photo shows one of the kitchens - let's just say I'm very thankful for my small, but efficient, and light-filled place to cook. 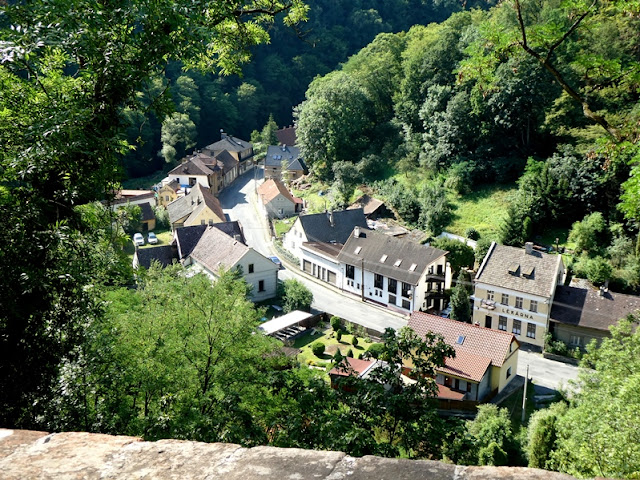 The castle is perched on a hill overlooking a small village. The steep climb from the train station, on a very hot day, had me looking for every bit of shade along the way. What a great view! 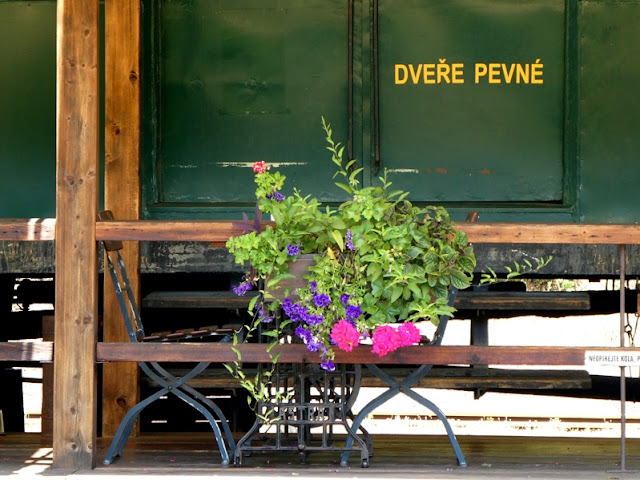 On the way back, we stopped at Nizbor for lunch in a converted former railway station. Flower boxes and tables made from old treadle sewing machines made it a charming stop. We ordered a traditional Czech dish, svickova - tender beef slices in a vegetable puree sauce, with dumplings and a bit of cream and cranberry sauce. It was filling (very) and delicious. It's one recipe I may try to recreate here. 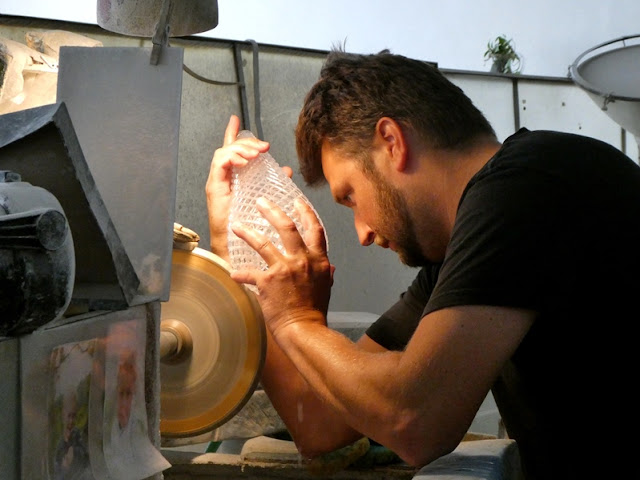 After lunch we walked across the railway track to the Ruckl Crystal factory and watched glass blowers and cutters at work. I admired the precision and speed of the gentleman above, cutting the patterns of lead crystal by looking through the glass. 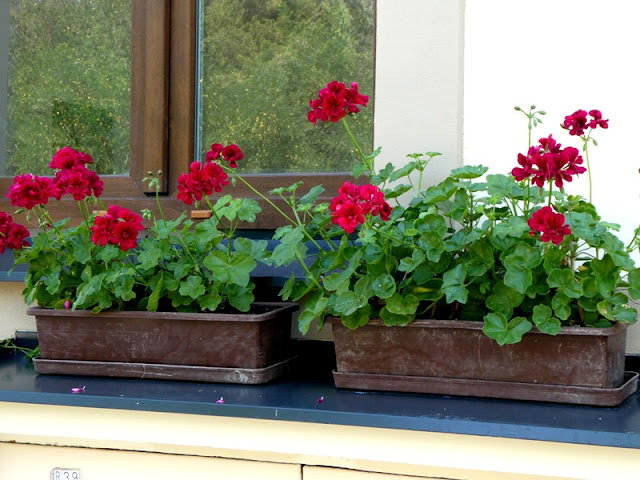 Soon we were on the train again, chugging our way back to Prague. The train station in Nizbor had these pretty geraniums on the window ledges.

Venturing out of the more touristy areas and relying on public transport was an adventure that turned out well. I am so impressed by the graciousness of everyone we interacted with - we don't speak Czech, but English, on varying levels, is common - and so we muddled along.

Linking with Mosaic Monday, hosted by Angie of Letting Go of the Bay Leaf.
at August 18, 2019

How lovely to catch a train and see more of the country. Always a little nerve wracking but often the best way to get a feel of the real country. The area looks beautiful and lunch sounded delicious. B x

Hello, what a lovely place to visit. The castle looks wonderful, beautiful flowers. It is nice to see sights from the train ride too. The lunch sounds delicious and it is neat to watch glass blower at work. Wonderful trip photos. Have a happy day and a great new week!

What a fascinating place to visit. Glass blowing must be veryinteresting to watch.

Good for you getting out to see the lovely countryside. All sounded exciting - I love watching glass blowers, amazing what they do. The food sounded interesting! Love the view down into the village. Train travel is always fun - we loved the Irish trains in June, definitely the way to go when driving a car in a strange country is not feasible.

Looking forward to seeing more about your trip Lorrie.
We're still in New Hampshire and having a busy time - taking a quick drive to the coast today, home tomorrow.

A Bit of the Blarney said...

What a wonderful adventure!! Lovely photos and beautiful scenery! Wishing you well.

Great fun and what an adventure!

Beautiful photos, Lorrie. The countryside would be interesting to explore.

...thanks for taking me on this mini trip, I probably will never get there!

How adorable, castles and good food. Glad you had a nice time. Happy mosaic Monday, thanks for dropping by my blog today

It's always nice to travel off the tourist path and see the sights of real life in a foreign country. I am always surprised to find many people that speak English in Europe. The views you had form the castle were beautiful and I'm sure it was interesting to watch the glass blowers and cutters.

Fabulous photographs, love your mosaics, and that view of the village is amazing.

The train ride alone would be magical. How fun that you ventured out. I love Rick Steves suggestions such as this. What wonderful adventure.

Lorrie - lovely pictures. Europe does a superb job with public transportation - I wish we had such options in the US! Most castles I have seen put the kitchen in the dingiest places - it's a wonder they could produce those banquets you see in the movies. I was impressed by the glass works, and a little surprised he wasn't wearing eye protection? It's refreshing to hear that people were helpful! Thanks for linking to Mosaic Monday!

Looks a great trip out of Prague, the adventure paid off! Certainly going by train means that everyone can enjoy the journey to/from without the map reader being under pressure with a 'which way now' question! It sounds as if it was a perfect way to climb through the hills and mountains, even if you did have a big climb to the castle!
Wren x

How id love to visit Prague, Lorrie! The tables made from old treadle sewing machines were charming. Your lunch that you described sounded wonderful, and the scenery....oh my! Thank you for sharing with us.

So beautiful! My husband has decided that he wants to explore Eastern Europe now. Our recent trips to Georgia and Bulgaria have been wonderful and eye-opening. Traveling never ceases to amaze me in so many ways. I always look up general words or phrases to try out while there and everyone is most appreciative. Thankfully, even if only a little, English is spoken and we've never been lost in translation. :)

How wonderful to get out into less touristy areas and really see the homes and countryside. I love the Crystal...what a beautiful art! Glad you had such a wonderful trip!

A wonderful trip! Did you have the opportunity to buy an item of crystal glass?
It's fascinating to watch a craft person at work.

Wonderful. Scenery, good food, craftsmen at work and navigating the train system ... loved it all. We spent some time on our own after our river cruise and , if I ever get there on my blog, I’ll have some train adventures to share as well. 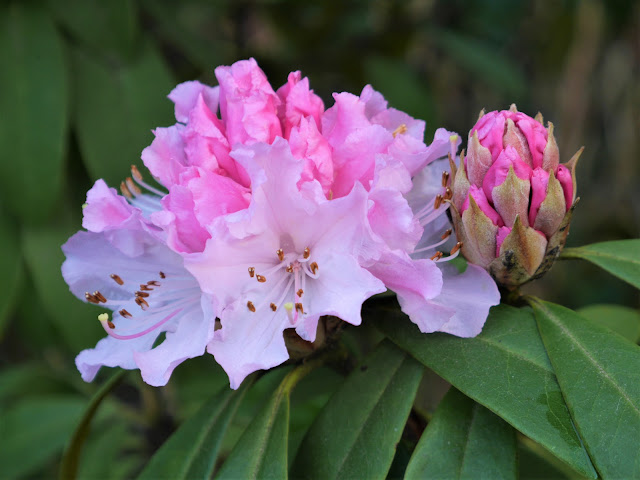