Five on Friday: A Castle, Blooms, and some Stitching 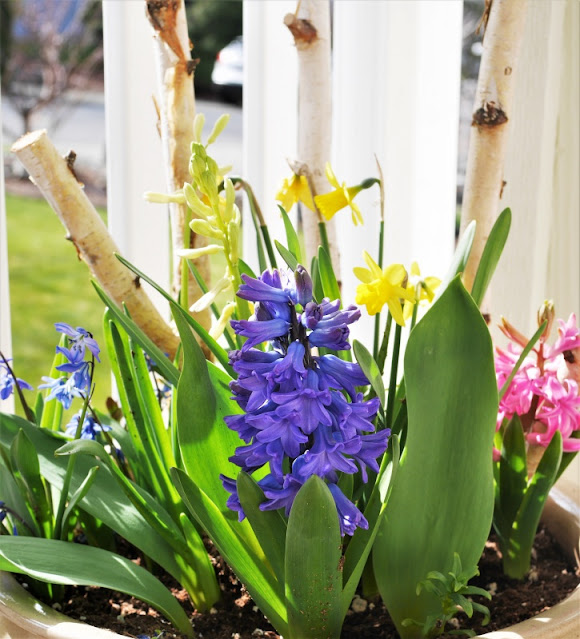 The other day I watched five fat robins in a tree from my bedroom window. They flitted from branch to branch with lots of cheerful chirping. A pot of spring bulbs beside the front door is filling out nicely. Hyacinths, daffodils, and scilla are in bloom just now, with tulips leafing nicely. Sunny, but cool days have been the norm until a few light showers fell overnight. 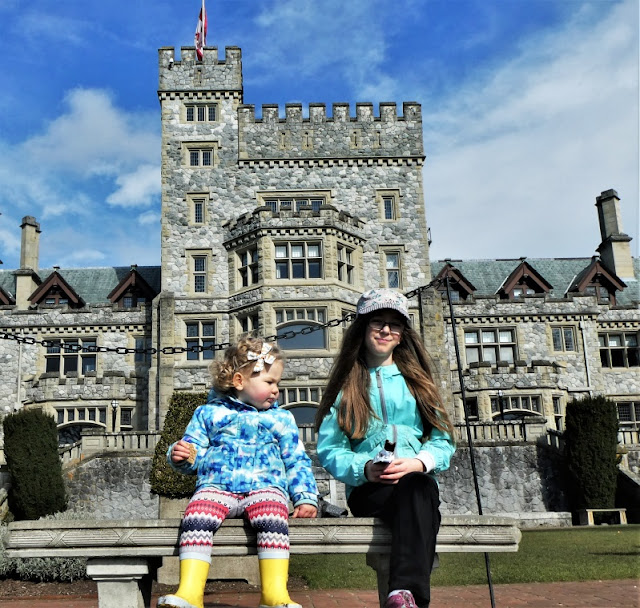 This week I arranged to meet my eldest daughter and her daughter, Sadie for a walk around the gardens at Hatley Park. It was the day I usually take Iris, so along she came, too. Unfortunately, we were there in the morning, but were told the gardens didn't open until noon. There have been a lot of schedule changes due to the pandemic. However, there were plenty of paths to wander along, and we will visit the gardens another day.
The girls are having a snack on a bench in front of Hatley Castle, home of Robert Dunsmuir, heir to his family's coal fortune. About the building of the castle he said, "Money doesn't matter, just build what I want." The lavish construction was completed in 1908 with an exterior of local stone and an interior with oak and rosewood paneled rooms, huge fireplaces, specially made light fixtures, and teak floors. The extensive gardens employed 100 gardeners.
Dunsmuir was not a pleasant man, from the sounds of things - he ruled his empire with brute force, fiercely stamping out any attempts to unionize, and neglecting safety for his employees. For every million tons of BC coal produced, 23 men died, at a time when the North American average was 6 men per million tons.
The castle and grounds are now home to Royal Roads University, and previously served as a military college. 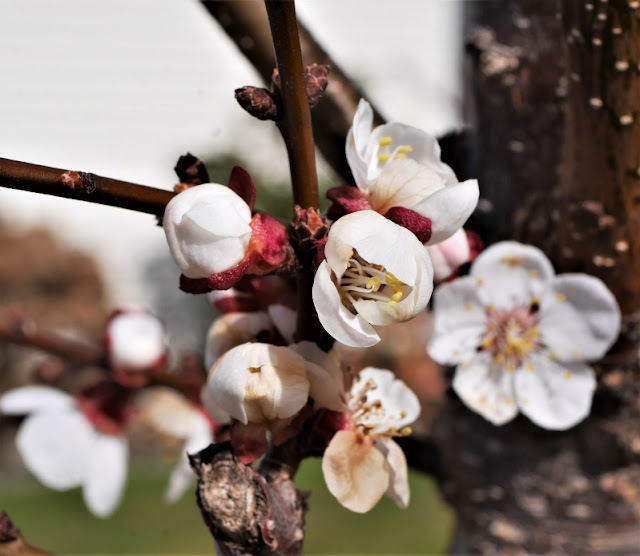 I've been out pottering in the garden, tidying beds, pruning rosebushes, and thinking about changes to be made. Tim built a new L-shaped raised bed in a corner of the garden that I hope to fill with flowers for a cutting garden. The apricot tree displays a few flowers; I hope the pollinators show up in time! 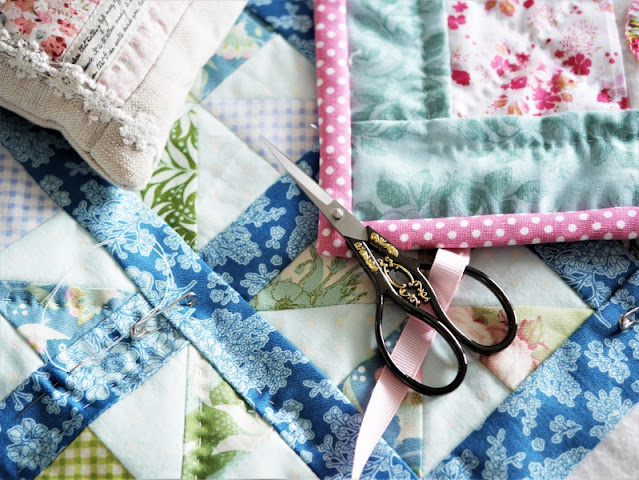 I'm taking part in a scrap challenge for the month of March. Very informal, it's just to deliberately sew with scraps or small bits of fabric leftover from other projects. I'm making a few mini quilts for the grandchildren to use as doll or stuffed animal blankets. There is something very satisfying about sewing these little projects. Tim often has to do email in the evenings, and since I no longer have marking or planning to do, I stitch. 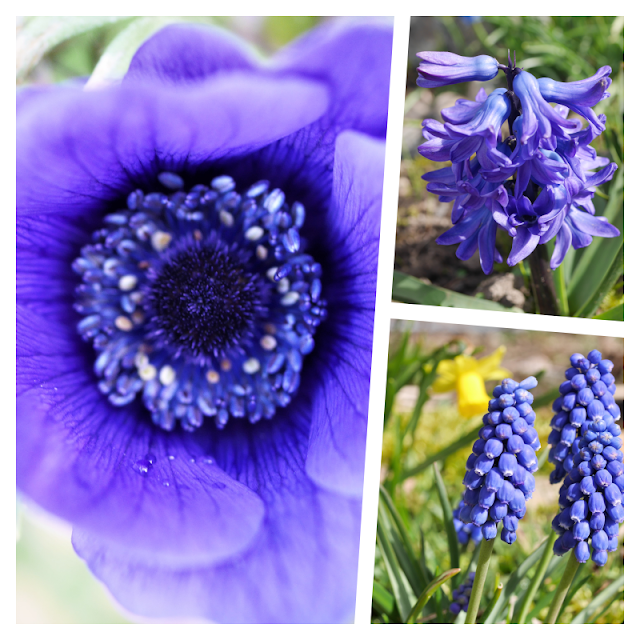 On a personal note, I damaged my vocal chords and throat when I choked on a miniscule piece of food this week. It's quite painful, and my voice is mostly gone. The doctor assures me that the inflammation will all settle down on its own, so I'm avoiding irritating foods and trying not to speak too much. I overdid the talking yesterday and am paying for it today.

This weekend I hope to work outside again, clearing out garden beds and clipping all the dried hydrangea blossoms to make way for the new growth. Spring is such a hopeful time of year. Wishing you a wonderful weekend.

My goodness, Lorrie, that sounds very painful! I do hope that it heals soon. I guess your evenings of quiet stitching away are a nice way of not being tempted to talk and you end up with such sweet little blankets. And what fun that will be for your darling grandchildren. I know your outing must have been fun to meet up with your daughter. The little cousins must have had fun even though it didn't open early. It seems to have a sad history but good has come out of it.

Such beautiful photos and your quilts are wonderful! I’m so sorry to hear you’ve hurt your throat, that must have been a frightening experience. I hope you feel better soon!thank you so much for your kind words today on my blog,

I love your flower photos -- all are beautiful! Such a pretty pot of spring bulbs, and fragrant I bet, with the hyacinths in there. Sadie(?) looks like a version of you with long hair. :D That Iris is so cute, I could squeeze her. Your mini quilts are looking lovely; I wish I could sew.

Was anyone with you when you got choked, Lorrie? I sure hope so! To me, choking is one of the scariest things there is. I'm sorry you damaged your vocal chords and I hope your throat is feeling much better very soon.

I hope you have a nice, relaxing weekend, Lorrie.

Oh, I hope that all heals quickly. You are so much further advanced with spring growth, then we are here. Enjoy your weekend.

The tiny quilts are so lovely. I'm sure the grands will love them.
I hope you throat heals quickly. What a frightening experience it must have been.

We sat on that very bench and had our bag lunch there last summer on our first visit to Hatley Castle. It was a little detour while cycling the Galloping Goose Trail. Such a beautiful place with lovely gardens!

So sorry about the damage to your vocal chords. Hope things heal as they should and you have your voice back soon!

Choking must have been scary, hope your throat is better soon. Those gardens sound wonderful although the original owner not so. So many tyrannical men back in the past. Lovely to see the blossom emerging and your beautiful sewing projects. Have a good weekend. B x

Your spring flowers are beautiful. The castle sounds interesting, and a beautiful place to visit. Prayers your voice heals well

It'll be so nice to get out and about this weekend! Good luck!
What a horrid statistic!

Your pot of spring flowers at the front door is such a pretty way to welcome the season. My neighbor across the street has two pots of tulips on her porch which make me smile when I raise the blinds in the morning.
The little quilts are such a nice way to use up scraps of fabric and they surely will delight your grands.
I hope it won't be long until your throat is healed and back to normal. That sounds like a frightening experience.
Happy Spring!

It looked like a lovely day to spend outside with family. I am sorry to hear about your throat!

Getting out with the little ones sure lifts your spirits! They are precious! And I love the scrap projects. I should do something like that. I like things that I can finish quickly. Enjoy your weekend! AND...I hope your throat is better today. What a terrible thing to happen!

I am sorry about the choking incident. Sorry, too, about the damage done to your vocal chords. Good thing that you can write!

Sweet photo of the granddaughters sitting on the bench. Hope that there is another garden visit soon. Happy spring🌷

I'm so sorry you experienced such a bad choking incident dear - I know how that can be as I have a a condition called DISH at the back of my throat which causes swallowing/choking problems. I pray your throat and vocal chords will soon heal - make sure to rest your lovely voice.
The girlies are delightful - that is some castle inside by the sound of it.
Your flowers are so pretty - it's great to know you will have a cutting garden this summer - can't wait to see what you grow.
Happy Spring today!
Mary x

So sorry to read about your throat and of course vocal chords, hope you have a speedy and pain free recovery. Love the mini quilts, they are such fun to make and perfect for the children. I am ready to get back into the garden.

Sorry to hear about the choking incident and damaged vocal cords. Sending you speedy healing vibes!

I've always enjoyed B.C. spring vicariously through you. Today, when I woke up, I actually heard some birds--it's like they were announcing the arrival of spring in Ontario!

What an enormous castle! It was interesting to read some of the history of BC, of which I know just about nothing. I googled to see where the castle is, not far from Victoria. I had no idea there was a coal mining industry on Vancouver Island. Your Spring blooms are so pretty, a really attractive collection. I am sorry you have injured your throat, do take care, and have a speedy recovery.

Good morning, Lorrie. So sorry to hear about you injuring your throat. I know it must be frustrating not to be able to talk, not to mention the discomfort. Hope you will recover very soon.
Your pot of blooms is gorgeous, as is your stitching. I love your scissors, they are so pretty.
We have many sad coal stories here in WV, many hardships were endured for the gain for a few.
Wishing you a week of lovely Spring weather.

Ouch. I am so sorry about the throat injury. Hope your voice returns nicely.
I love the kids in front of that ancient building. To me it is ancient.
I have ONE HYACINTH popping up in my garden . ONE!!! I was overjoyed to see it yesterday.
And come to think of it, my blanket is mostly leftover yarns, or given yarns, so I can join you in spirit.

Thank you for sharing these lovely photos.
Good adventures.
Interesting history of this Dunsmuir guy. Fantastic house and gardens.
Your grand girls are adorable.
So sorry about your choking accident. I know that must have been scary. Just yesterday I was snacking on popcorn and got some tiny piece stuck in my tonsil somewhere. I guess I am getting so old I need to monitor my food choices and chewing just like my one year old grand boy 😁😅 Get better soon.

Hi Lorrie, I have just recently read the book of the Dunsmuir family. There was very little
if any consideration for the men. They were a very disfunctional family.
The cherry blossoms must be in full bloom in Victoria, adding beauty to the City.
The grandchildren are so adorable and growing so quickly.
Hope your voice is on the mend.

Oh my . . . I hope that your vocal chords and throat are well on their way to healing by this time! As always, I enjoy seeing your lovely photos. The first photo with the brightly colored blooms is a favorite, just behind the one of your darling granddaughters! It looks like they are enjoying one another's company, despite their age difference and despite the change of plans.

Your spring flowers are so lovely.
How wonderful to go walking with special girls in your life. That is the best!!!
Hope your voice heals quickly. How lovely to have evenings now for quilting.
I believe I have visited that castle.

Oh boy...I'm hoping your vocal chords repair themselves soon. It's nice to see you could meet up with your girls at Hatley Castle. My sisters and I were there 10 years ago for my 60th birthday getaway. Honora was our gracious host one day to show us some special spots around Victoria.

So sorry that happened to you!!!! -sigh- It's a sad reminder, to be very aware of how we prepare food, for swallowing.

But later, you said you are better. Hooray!!!

Friday: A Changeable Day in May

This morning I walked to the library to exchange books. A few blocks along I realized I'd forgotten to tuck a mask into my pocket, so ... 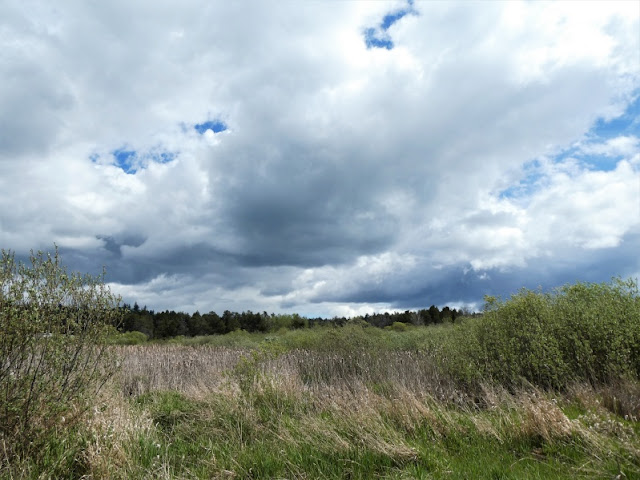