The Last Friday Five of November 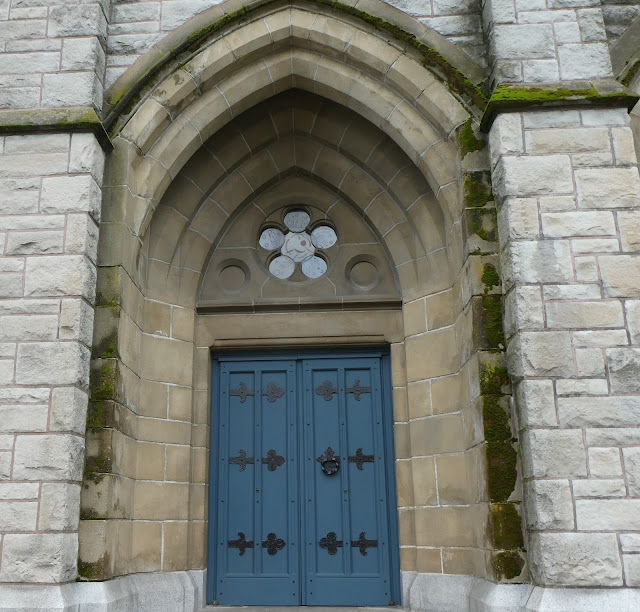 1. Last Saturday Tim had an eye checkup downtown and while he was there (his eyes were dilated so he couldn't drive), I wandered around a bit. It was too early for stores to be open and there were few people around. The Cathedral looked very pretty in the grey light, especially those blue doors. I don't remember them being that colour before, but I haven't been in the area for awhile. 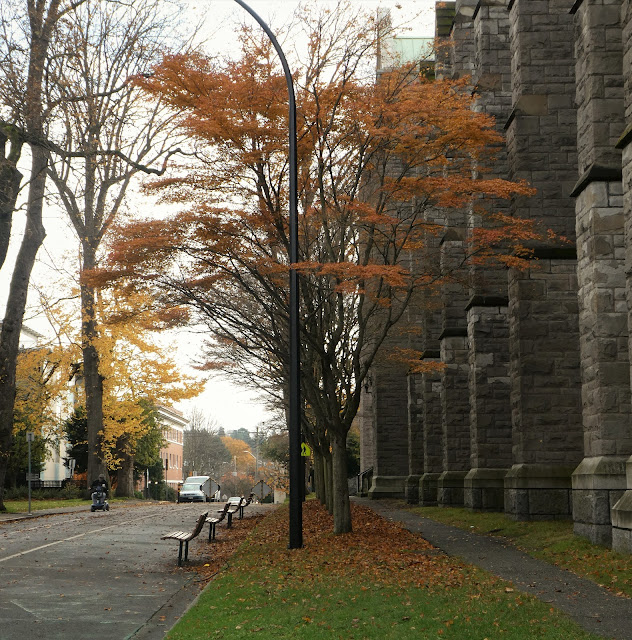 Between the Cathedral and the graveyard runs a short street lined with tall trees and benches. A bit of colour remains in the photo above, but if those trees are anything like ours there are precious few leaves left.
From the bedroom window on the second story I look down at the the circle of leaves that formed under the acer maple and it almost glows with vibrant colour. 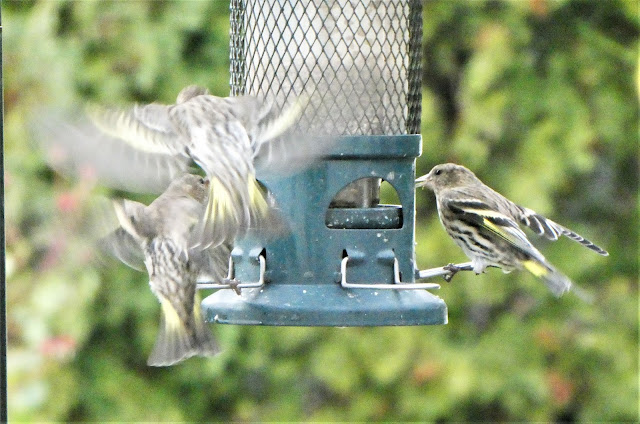 2. A noisy, scrappy flock of Pine Siskins showed up at our feeder. They are small but aggressive birds who don't like sharing with others. 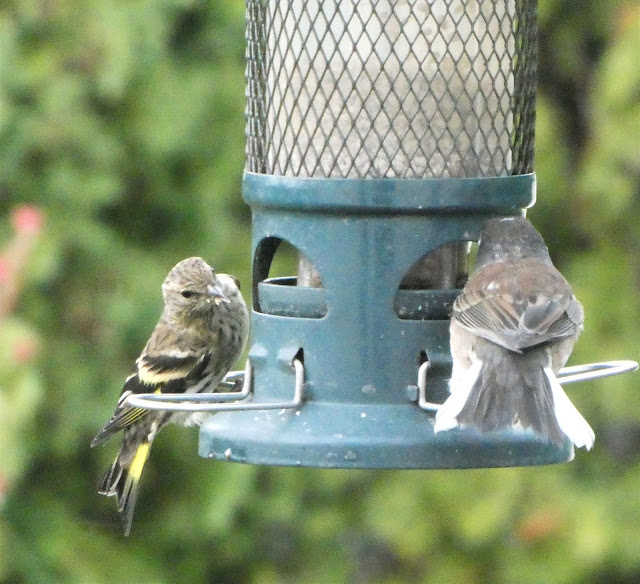 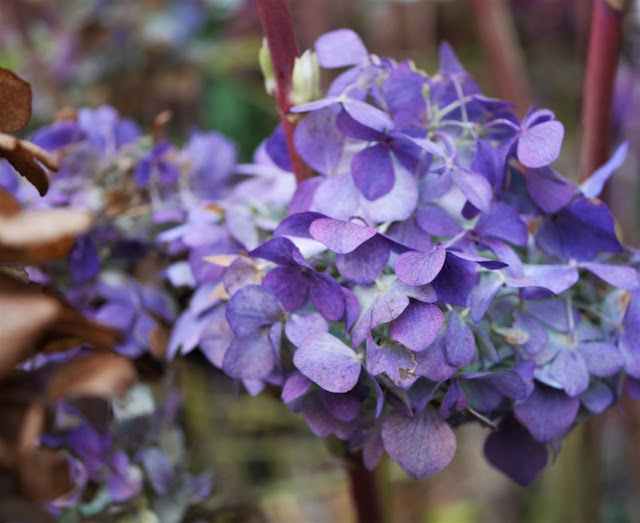 3. I've noticed a few blooms on the large hydrangea bush turning a silvery purple colour that stands out against the burgundies and browns of the remainder of the fading blooms. 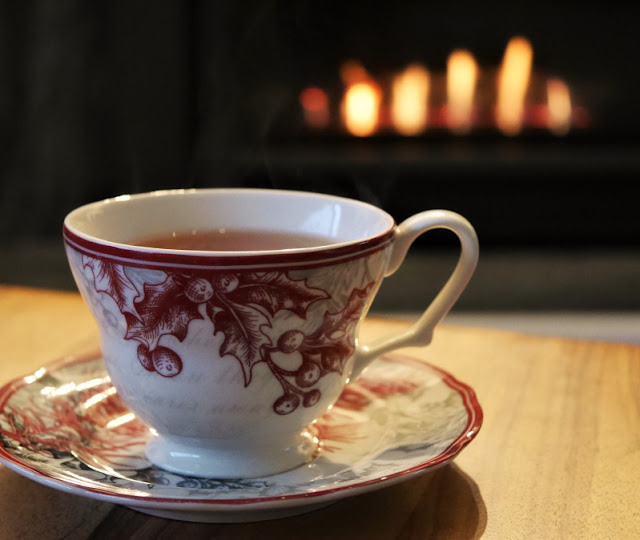 4. Here we are at the end of November. One month until Christmas. It doesn't look promising for family get togethers so we are planning a festive time for two.
I made a comment on another blog that received some attention and I thought I'd say the same thing here.
Regarding the pandemic - Our Provincial Health Officer, Dr. Bonnie Henry is a wise and compassionate, and very qualified doctor to be in charge during this time. I am so very thankful that the pandemic has not become a political issue here as it has in other places. Dr. Henry says that restrictions are not intended to stop the virus, for that is impossible at this stage, but to protect the most vulnerable, and to protect our health care system.
One way to gauge the effect of a pandemic is to look at the excess death rate. Death is part of life and every country has an anticipated number of deaths. However, excess deaths are just that - deaths in excess of the expected number. A simple online search reveals that the UK had 70,000 excess deaths this year, and the USA more than 200,000. All excess deaths are not attributed to the coronavirus - there may be deaths due to lack of seeking medical attention, or overdose deaths. In the earlier part of the year, until September, in Canada the death rate actually declined, likely due to people staying at home more and not engaging in risky behaviour.
It's a complicated issue requiring complicated measures. I love Dr. Henry's constant urging to Be Kind, and to act together to combat this virus. 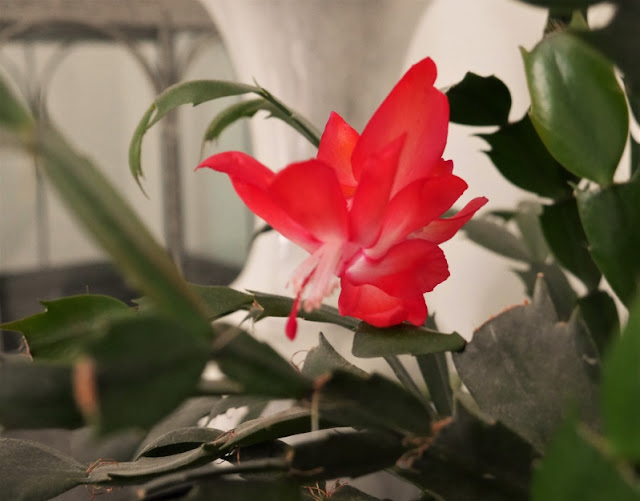 5. If you are still reading, here's a beautiful bloom from my Christmas cactus. There are few blooms on it and I'm enjoying the ones there are.

This weekend I'll be setting up the Advent calendar and wreath. I'm still sewing pajamas - I've procrastinated this week and did some other things. The vast majority of my shopping is done and I might begin baking. I did make the Christmas Fruitcake last week.

I hope that your week has been a good one, and that the days ahead will be filled with anticipation.

Email ThisBlogThis!Share to TwitterShare to FacebookShare to Pinterest
Labels: birds, Five on Friday, these days

It sounds like your medical health officer is very sensible. We too on our small island are fairing well so far. Very few hospital cases. Let’s hope that doesn’t change. Love all your different birds. We are mainly blue tits, sparrows and gold finches here. Love your siskins. Hope you have an industrious weekend. B x

We really haven't done well in UK, partly due to groups of people who flouted the rules. I am hoping that the coming relaxation of regulations doesnt have an adverse effect.
Our bird feeders have been swamped lately, and the blue tits and goldfinches have returned. We too have siskins but they are much brighter yellow in colour than yours.

Your Dr. Henry comes from PEI. We trust our Dr. Heather Morrison too, another Islander.

The birds you mention sound wonderful. I am only familiar with the junco.

Your health officer sounds very sensible and wise. You have some lovely birds visiting your garden, I like their names. We have lots of different birds flitting around at the moment filling up on sunflower hearts and suet nibbles now the weather is cooler:)

Those blue doors are beautiful! Wishing you a wonderful holiday season.

The Center of Disease Control in the US has issued a report that says only 6% of the 200,000 deaths were actually caused by Covid. They included cancer, heart attacks, and car accidents etc, in the original tally. I, myself, know of a family who lost their son in a car accident. The death certificate said cause of death was Covid. Our media does not report any of this. Why?

Dear Lorrie,
Oh, those Hydrangeas. What beautiful shades of blue. We can grow white hydrangeas but not those beautiful colors you have blooming in your garden.

I always love your photos, Lorrie.

The church doors, the hydrangea, the birds....

I’ve read our death rate in the United States is on course to be the same as an average year, and as Ellen said above only 6% of the virus death numbers were from the virus itself. There is a lot of mistrust of the media here.

Those blue doors take away from the starkness of the grey concrete. The benches,it looks as though are they on the street? We have enjoyed the humming birds on our deck as the flowers have continued to bloom late this year. Nature brings so much to us.

hostess of the humble bungalow said...

My goodness that is a pretty teacup and saucer! It is so cheerful!
Take care, and stay safe.

Lovely pictures. I agree about the Pine Siskins. THey don't share well, but sure are fun to watch.

Lovely pictures! We used to get Pine Siskins every winter but not any more. They'll interesting little characters.

Five lovely photos! It is always surprising when a bloom pops up out of season, surrounded by the spent ones! We have a pair of camellia shrubs in our front yard that send out a few blooms when we have a warm spell.

Although I wish it were not true, I am afraid that the virus has become political here. Sigh. It makes everything more complicated.

Like many others we shall be staying at home as a twosome during the Christmas period. It is just not worth taking the risk, especially now, when there are 3 vaccines on our immediate horizon.

Good morning, Lorrie. Our holidays will be different for most everyone this year. But, we are happy in our sweet home and thankful to be well. We only go out for necessary appointments and to the store. Our numbers are rising rapidly here in our small state. It is all very scary. But I try and focus on the beauty of this upcoming season. Have a lovely day and week ahead - stay well.

Lovely photos. The benches so close to the street is confusing, but interesting against the large stone cathedral. The excess death numbers can also be confusing, but when the pandemic is added, the other deaths pale in comparison. Dr. Henry sounds like a person every country would like to have.
You beautiful dishes are always a treat to see.

The CDC in the United States lists all deaths involving Covid at 240,000 from 2/2020 until now. This includes those who died with Covid and pneumonia, diabetes, etc. For 6% of the deaths, COVID-19 was the only cause mentioned. I think your statistic of an excess of 200,000 deaths in the U.S. is right on point. You are lucky in Canada that most people listen to the doctors and scientists. Not so much here.

With such sensible restrictions in place, so well-followed by Canadians to such positive effect, it is sad to read comments from Covid deniers in the U.S. Such a waste.

I do find your posts so soothing, thank you for that. I am setting up my Advent candle decoration this afternoon and will pull out my Advent calendar, nativity set and Christmas mugs tomorrow in readiness for 1st December. This year we will decorate much earlier than usual because we are ready for some light and sparkle. We are allowed to form a "Christmas bubble" with two other households between 23rd and 27th December but either side of that, we don't know what will be allowed. We are locked down until Wednesday and then shops and businesses can reopen, but we are not allowed to meet in private homes. That will be reviewed on 16th December. I am planning nothing and thankful for good health. Take care. x

Here we are at Advent already. I hope with anticipation that those who know the Lord will grow in their love and knowledge of Him.

I loved seeing your part of the world. It looks a bit like here. Most leaves have now fallen to the ground. What a beautiful Christmas cactus bloom. The blue door on the grey cathedral is pretty. As I watch the COVID numbers go up and up I am trying to figure out how to celebrate Christmas. For Thanksgiving we delivered their meals to their doors, stepped back with a brief greeting, then came home to eat with just the three of us in our home. Christmas may be like that too. We all must take care for sure and soon we can pray the vaccinations will be available for everyone.

I wished that our PHO was more like Dr. Henry.

I do like your teacup and saucer, and a lovely colourful bloom from your Christmas Cactus.

The most amazing thing of all is that Provincial health officials have become household names throughout the entire country!

A Bit of Spontaneity Does the Soul Good

Late Sunday morning the sunshine streamed into the house, warming the living room, casting sharp shadows. It was just too beautiful to sta... 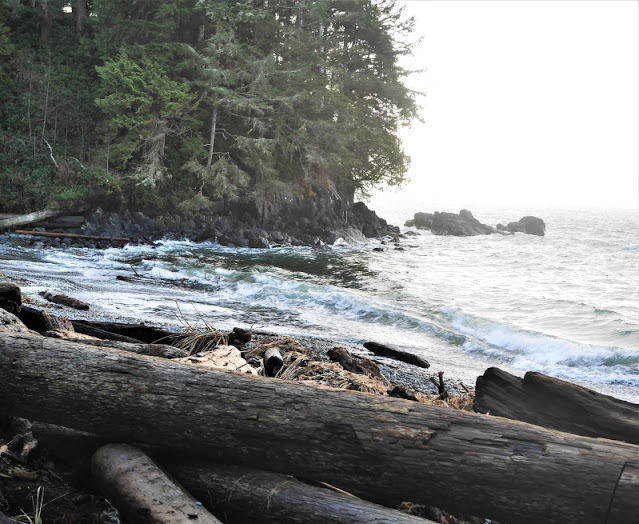