A Small Hamlet in a Big Landscape, and an Adventure 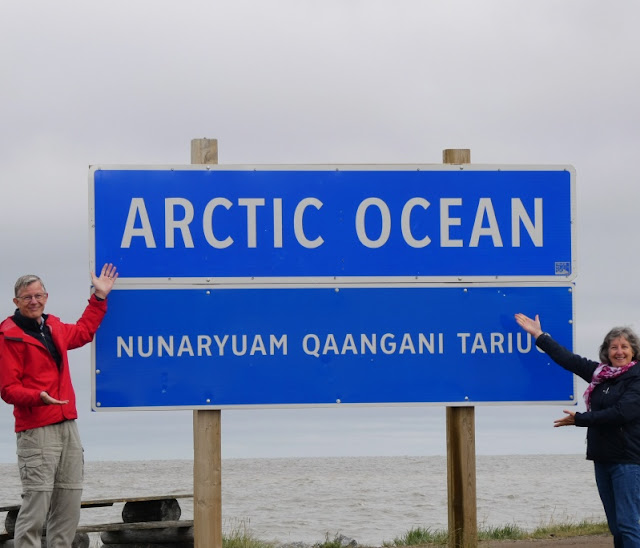 En route to the Arctic Ocean, we stopped in Fort McPherson to purchase a few groceries. While there we met an Inuvialuit man who asked us about our trip, opening the conversation for us to ask us about his life.
He is from the hamlet of Tuktoyaktuk which perches on the edge of the Arctic Ocean. His wife is Gwich'in and because her mother needed some care, they lived in Fort McPherson. He was purchasing groceries for a trip he planned to make, down the river, past Inuvik to Tuktoyaktuk. His purpose was to hunt a beluga whale, about 16 feet long, he said, for food for the winter. People there still live very traditionally, hunting and fishing, gathering berries, and storing food for the long months of winter. 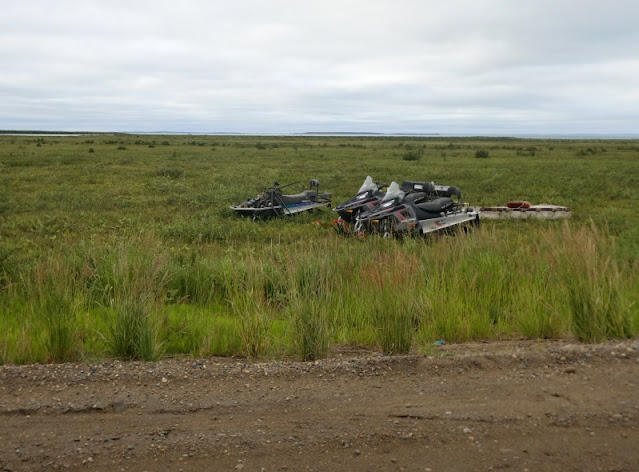 In 2017 a year-round road opened between Inuvik and Tuktoyaktuk (shortened to Tuk by everyone). Previously, access was via air (costly) or by ice road for four months of the year. The landscape changes from boreal forest of spindly evergreens to vast expanses of tundra marked by innumerable lakes. Small cabins hug the lakeshore, providing shelter for hunting parties. Surprising to us were the seemingly abandoned snowmobiles alongside the road. We saw at least 50 of them. It seemed to us that when the snow melted, the snowmobiles were left in situ, and when the snow returns, owners will return and use them once again. 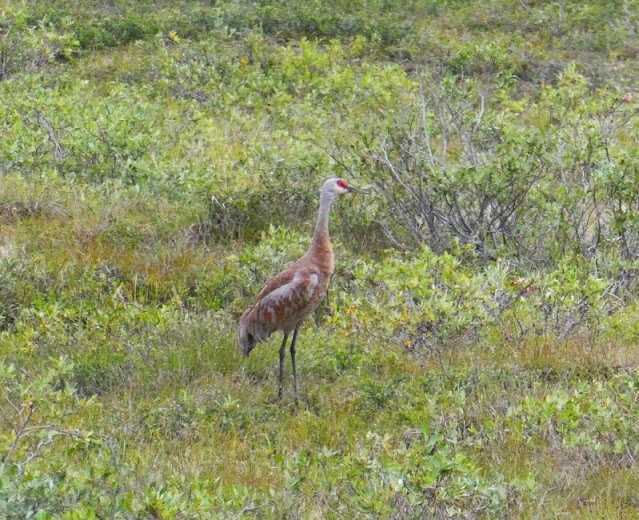 We saw a number of what I think are Sandhill Cranes on the tundra. They migrate here to breed, from the southern United States where they spend the winter. They are large birds, and quite striking with the red patch on their forehead. 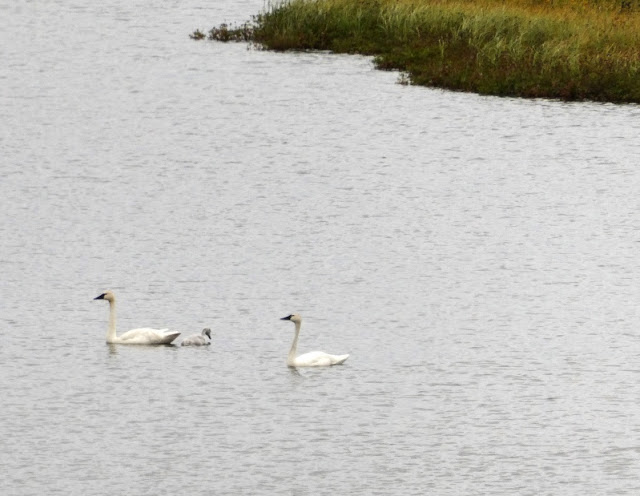 On several lakes Trumpeter Swans drifted with their young. We sometimes see them here on Vancouver Island in late winter when they are returning north to lay their eggs and raise their young. Such elegant birds. I wondered if they were Tundra Swans, but because they are so large, I decided they were Trumpeters. I'm open to any correction. 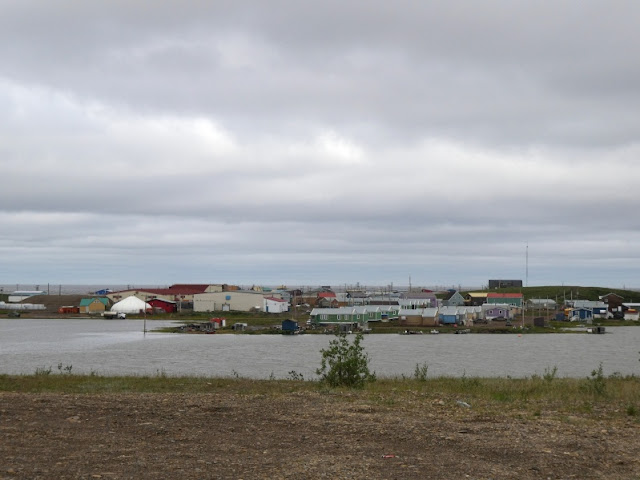 The hamlet of Tuk is a string of small homes on a peninsula jutting out into the Arctic Ocean. Industrial buildings dot the landscape, including the Distant Early Warning (DEW) line radar station, which monitored Soviet planes during the Cold War. The still-active station is now run remotely.
I was disgusted by the evidence of oil exploration in this area. In previous decades (70s and 80s), several companies brought in huge amounts of equipment in order to explore for natural resources. They built camp buildings to house workers, and constructed maintenance yards. The oil business diminished and all of this equipment remains, despoiling the landscape. A half-submerged barge sits in the harbour, and heavy equipment is left to rust. My opinion is that the companies that brought this stuff here should be made to remove it. 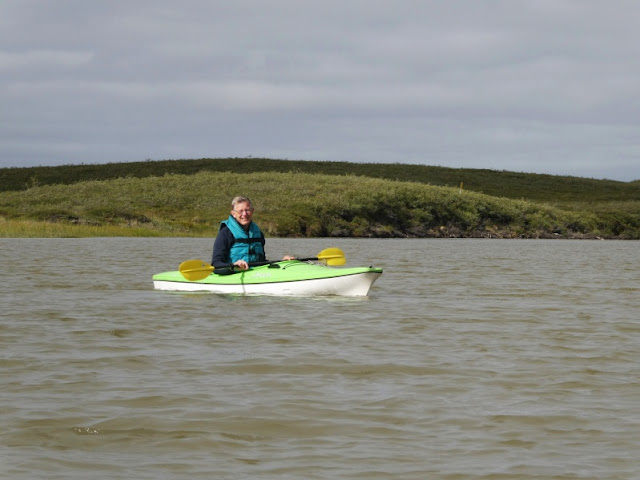 This was the coldest day of our trip, with a temperature of 8 degrees Celsius. The previous day had been rainy, but before that unusually high temperatures were the norm for this summer. We wondered about taking a dip in the ocean, but the chill Arctic wind howling from the north soon changed our minds. Around noon, however, the wind died down, the sun came out, and it warmed up enough for us to kayak at the Pingo Canadian Landmark. We wore several layers, including rain jackets and rain pants, along with our life jackets. 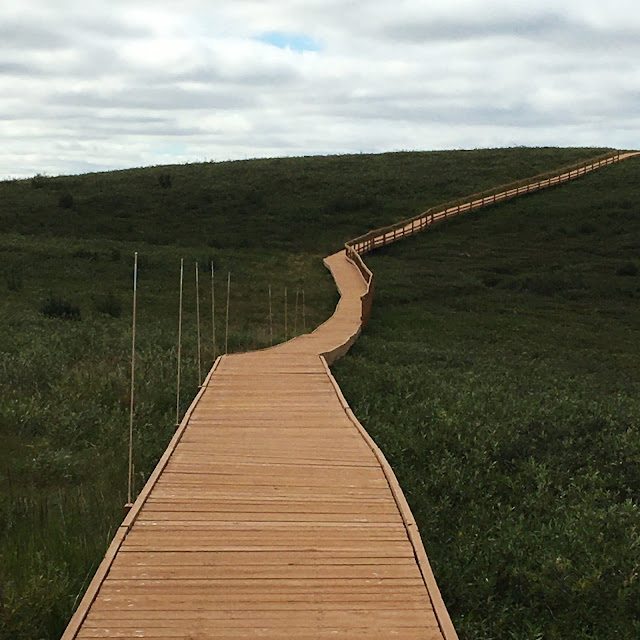 Our goal was this boardwalk across the tundra to a viewpoint overlooking a particularly large pingo. What is a pingo? It's an ice-cored hill that rises from the flat tundra. The Inuvialuit people use them for landmarks while traveling. We tied up at the dock and walked along the 400 metre boardwalk. Along the way we noticed a variety of plants, including wild rhubarb and cloudberries, in the tundra. 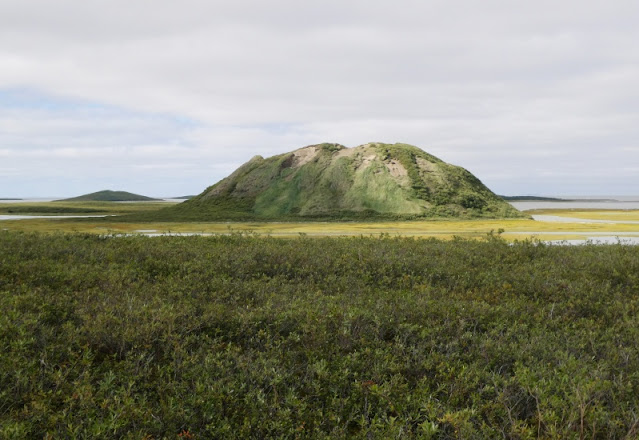 Although one could paddle directly to the pingos, walking on them is not allowed during the spring, summer, and autumn, as they are quite fragile. 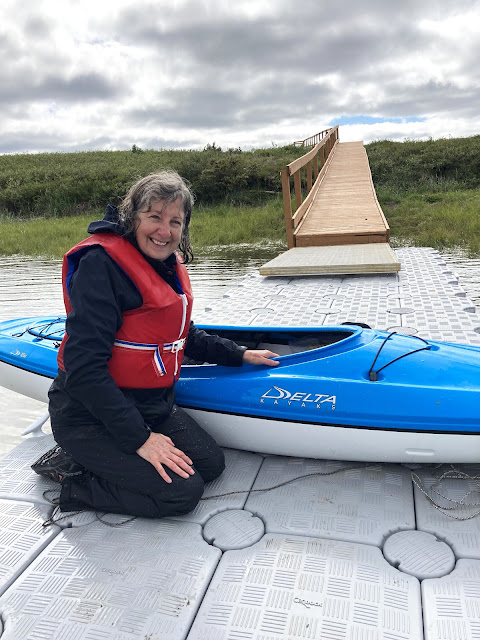 Returning to the dock, we prepared to get into our kayaks. Tim was busy doing something with his, and although he usually holds my kayak for me to enter, I decided to be independent, and enter it on my own. (cue ominous music) Things were going well until there was a realization of impending doom as the distance grew between my feet in the kayak and my hands on the dock. Yes, dear reader, I went right under. It was a bit of a shock, alright! But when I came up, I was more concerned about my phone and camera in the now upside-down kayak. Fortunately, they were in double-sealed Ziploc bags and popped up to the surface without incident. (aside - I do have a waterproof case for kayaking, but I'd left that in Inuvik. - sigh)
I couldn't stop laughing as Tim pulled me onto the dock, righted my kayak, and took care of everything. He was quite shocked, he said, when he heard a noise and turned around just in time to see my head go under. He snapped a photo of my drowned rat Arctic look. It was chilly, and I still had to paddle 30 minutes back to shore. The exercise kept me warm, although I was shivering when I changed out of my wet things. (We brought a change of clothes in case the weather warmed up). We blasted the heat on in the Tahoe and that felt absolutely wonderful! 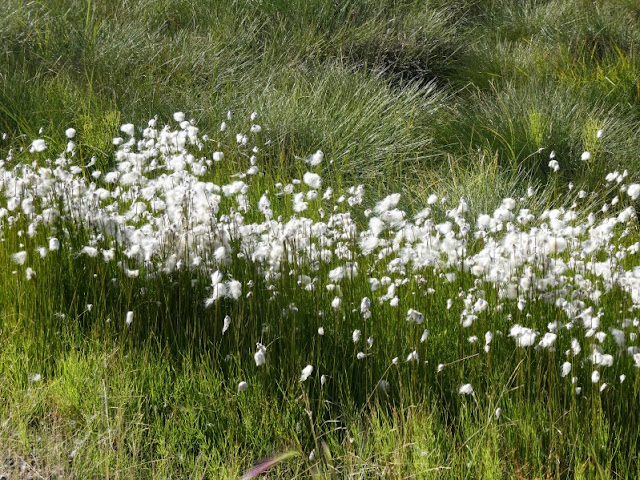 Soft cotton grasses grow on the tundra, and when we stopped to pick up a hitchhiker from Spain, I snapped this photo. It's fun to run one's hand along the grass, for it feels like cotton balls.

One common question I am asked is about the temperature of the water. It was cold, but I had on a number of layers, and where I fell in was part of the delta. I personally think going into the ocean here on Vancouver Island is colder, but then, I'm usually not wearing so many clothes.

All's well that ends well, and this adventure will be memorable in many aspects.

Email ThisBlogThis!Share to TwitterShare to FacebookShare to Pinterest
Labels: tothearcticandback 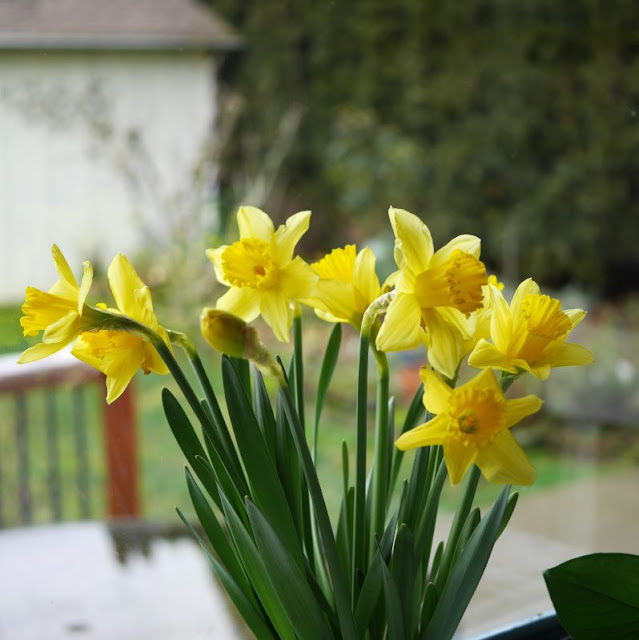