After our company left on Sunday morning and we got home from church, I began decorating. I like to take my time - not doing it all at once. The first thing I take out is our hand-carved nativity set from Ecuador. We lived there more than 20 years and purchased this during our first year there. I set it on the china hutch and surround it with greenery.

Several years ago I overheard our three children discussing who was to get the nativity set when we died! Since I wasn't planning on dying any time soon and didn't want to precipitate the matter, my husband and I decided to give each child their own nativity set. This was about the time that the children were beginning to graduate and we knew they would be setting up their own homes. So we went back to San Antonio de Ibarra, a small town in northern Ecuador, known for its woodcarvings.

Quality had deteriorated - there were so many poorly done carvings, not the same quality as we had purchased. But we went into one shop and found a set, beautifully detailed. It was expensive but we bought it and ordered two more. We got one of the orders in about 8 months and the next one was never done. So we settled on a lesser quality and told our son that the original set would be his some day.

I wrap each piece individually in old Ecuadorian newspaper. Joseph's hand is a separate carving which fits into the sleeve. The detail is amazing.

A crocheted snowflake hangs on the mirror. A touch of simplicity on the staircase.

Email ThisBlogThis!Share to TwitterShare to FacebookShare to Pinterest
Labels: christmas

Whata a wonderful treasure Lorrie. And how nice that you have given a set to each of your children as well.

I collect nativity sets, and always look for them when I travel. During advent I have a different one in my advent basket every day. The one today is handmade from a small mountain village in southern Italy, I only have Maria, Joseph and the baby Jesus.

Today we crossed the Arctic Circle. I’m sitting at a gas station in Fort McPherson in the Northwest Territory. It’s a beautiful, warm suns... 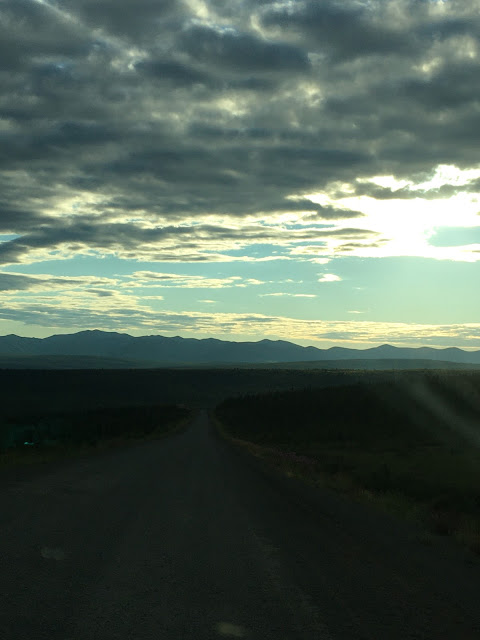