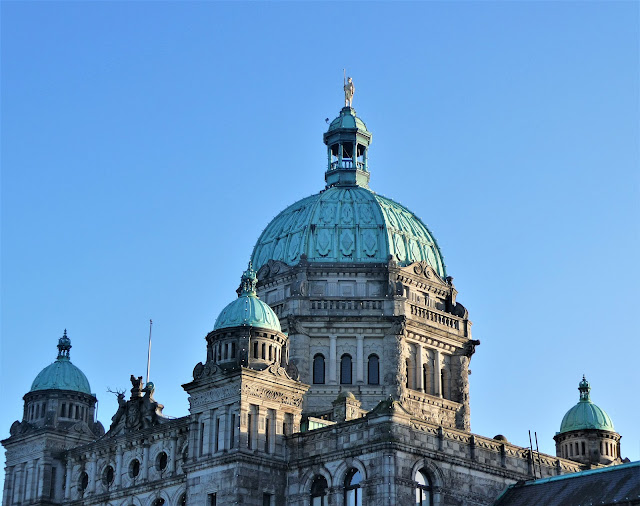 You wouldn't know it from the photo above, but yesterday morning the rain poured darkly down. Birds hunkered in the hedge. I was glad to stay indoors and turn on all of the twinkly lights. We had planned an afternoon to evening outing with the older grandchildren and some of it involved the outdoors. So when the skies cleared up shortly after lunch, and the sun shone, we were greatly relieved.
Our outing involved going downtown and how beautiful the Legislature building looked against the blue sky, with the afternoon sun slanting against the stones. 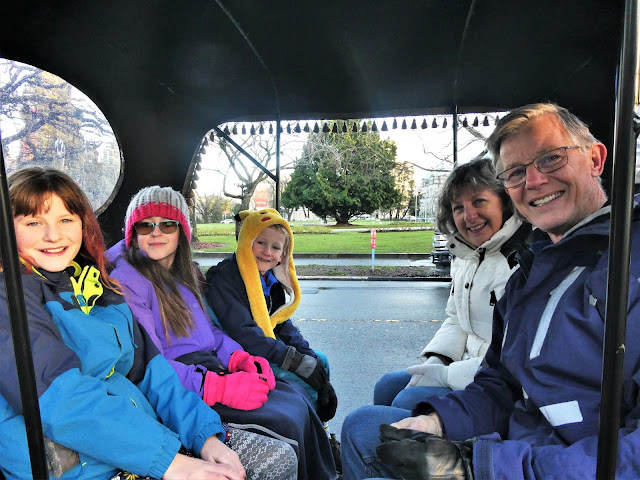 Each year we plan an extended time with the grands, with fun activities. This year we signed up for a horse-drawn "sleigh" ride - the sleigh was on wheels since snow is in very short supply here on the south Island.
Everyone bundled up and we enjoyed our trip. Christmas music played, there was some singing, and the clip clop of our horse, Henry, along with the gentle motion of the "sleigh" provided a soothing background. 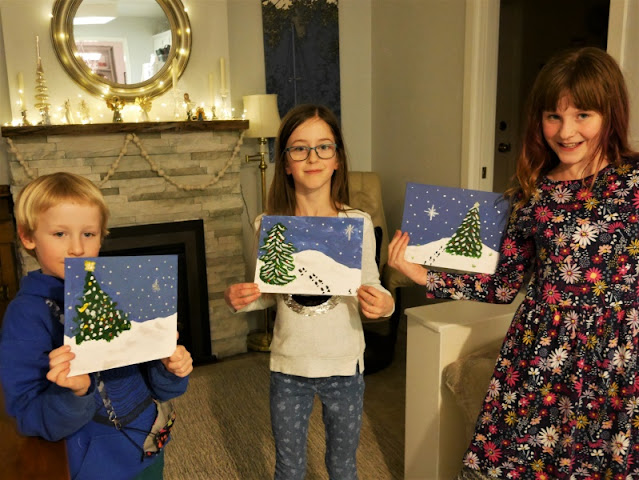 Then it was home for a craft project - this year we painted snowy scenes. I found one on the internet that I painted as a sample earlier this week, and painted another alongside the children. Didn't they do a great job? 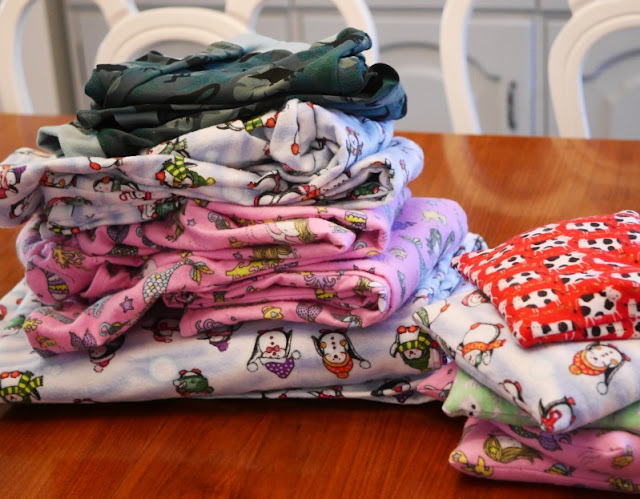 I finished the pajamas (and one nightgown) later than planned, but they are all complete. I made rice bags to accompany them - cozy for heating up in the microwave and cuddling with. They're also fun to throw back and forth. After pizza for dinner, and some cookie decorating (and eating), we gave the grands their new nightclothes and they promptly put them on to watch a movie. Hot chocolate with marshmallows and a candy cane were enjoyed alongside.
Iris and Cora will get their new pajamas later this week. They are a little young for this kind of a gathering. 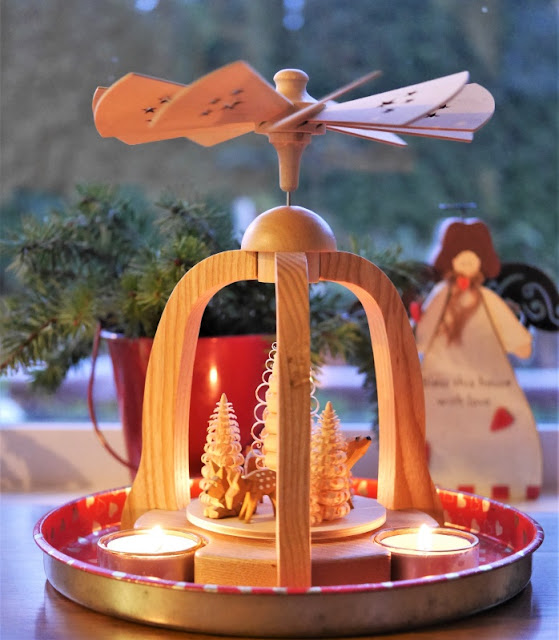 Clear skies continued today (Sunday). Did you see the fat full moon? Tim and I both awoke early this morning and decided to get up and go for a walk while it was still dark (6:45). Light frost covered the roads and the moon shone white until the sky lightened into pale blue.

Friends came for a casual lunch after church today and we enjoyed seeing their recent travel photos (business combined with pleasure) of Paris (oh my) and Uganda. They returned about 3 weeks ago.

The last few days before Christmas are enjoyable ones for me. Most preparations are completed and I indulge in a few craft projects, a bit of baking, and gift wrapping. There will be visits with family and final preparations for the 25th. I'll light candles and play Christmas music.

I wish you all a good week as you prepare your heart and home for Christmas.

Oh, and the weather forecast currently shows a distinct possibility of SNOW for Christmas. How magical would that be?

What a wonderful outing with your older grands. They all did a great job with their paintings, each unique! What special gifts those pajamas are, too. Merry Christmas week to you.

Sogood tohave fun outings with grandchildren. It seems a long time agothat ours were that age. Lovely pyjamas!
We are almost on the edge of another lockdown here, so have had to cancel gatherings with friends.

What a wonderful outing you had.
Yesterday we travelled to the sea with Christmas carols playing in the car!
You’ll be very lucky to have snow for Christmas.
I wish you a Merry Christmas to you and your family!

It sounds like a wonderful time with your Grands! Merry Christmas and I hope you get snow!

Such a wonderful time with your grands, and I love the idea of painting together. Merry Christmas to you!

I love the sleigh ride and you have a family of artists, don't you? Very nice paintings! Love those cozy pjs and rice bags. I made a rice bag a few years ago when you told me how! Holiday hugs, Diane

Delightful... And covid conditions did not stop you.

What a fun time with your grandchildren . . . they will treasure these memories forever. I was the last of my parents children and grew up closer in age with my nieces and nephews than my sister and brothers. The other night I was on the phone with one of my nephews and we were reminiscing about what a good childhood we had. Family time with each other is the best time sent.

What a lovely time you had!
We aren't seeing the girls this year. Too much Omicron and Delta around. We'll postpone it, I think. They are supposed to go to Vancouver Dec. 29th to see my son's family, but I hope they don't.

What great ways to create meaningful Christmas memories with the grandkids.

I'm impressed by the cute pajamas!

How lovely that the weather cleared up and you were able to fully enjoy the "sleigh" ride with the grands. I hope you get your white Christmas; I think we will too.

Hello, Lorrie. Sounds as though a fun time was had by all. Those dear ones will never forget your tradition of making them pajamas. They will warm their hearts for years to come. I hope you will see a white Christmas, it is not in the forecast for us this year. Merry Christmas to you and all your family!

Ratana said...
This comment has been removed by a blog administrator.
5:36 PM

Ahh... I just love how you spend time with the grands! I'm sure they've been looking forward to it! I haven't planned anything specific this year, but did have a spur of the moment baking time with the two youngest ones. Our oldest is staying with us right now and it lends itself to a whole new world.

The children look delightful and are growing away now - how fast the years fly! Love all the sewing you've done Lorrie, you really put heart, soul and a lot a special thought into creating such lovely clothing. I just know the kids will always remember this in the years ahead.
Love the pic of you and Tim with them - definitely a keeper.
Enjoy these last few days before Christmas - busy but happy, hopefully sunny and bright.
Sending special hugs from us both.

Glad you had a fabulous time with your Grands.

Have a wonderful Christmas, Lorrie.

The time with your grandchildren sounds wonderful. Memories they will cherish for a lifetime.

Merry Christmas to all Lorrie! The grandma and grandpa time sounds absolutely delightful -- for young and old. Such fun. The rice bags are a fun idea!

Your grandchildren gathering is so precious. Yes, they did a great job on their paintings. Loved the ride downtown. I just know they will be loving the pj's and rice bags. What a special grandmother you are.

Time with the grandchildren looks just wonderful. They are all budding little artists, with great style. Well done with all that sewing, I am in awe, and the kids will love it. The bright blue skies really show off the beautiful Legislature building - there are many such buildings in Canada I have admired. Merry Christmas Lorrie and I hope the magical snowfall comes, the icing on the cake!

I really like the blog and I hope people will have a new blog, thanks for the blog
ហៃឡូ Online

Beautiful photos. Merry Christmas to you and yours & thank you for your blog friendship 💕

Looks like you had a lovely family day. Well done on the pyjamas. Fingers crossed for that snow. B x

Angela Davidson said...
This comment has been removed by a blog administrator.
3:07 PM

Angela Davidson said...
This comment has been removed by a blog administrator.
3:08 PM

Along the path where I often walk, native Camas Lilies ( camas quamash ) bloom in clouds of blue. Morning shadows lie long across the brow... 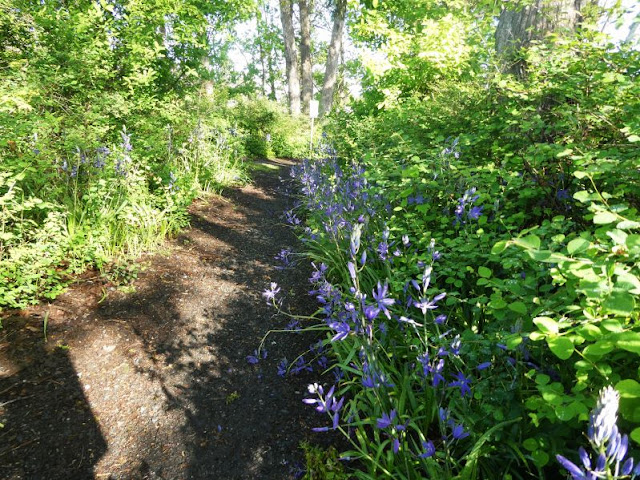