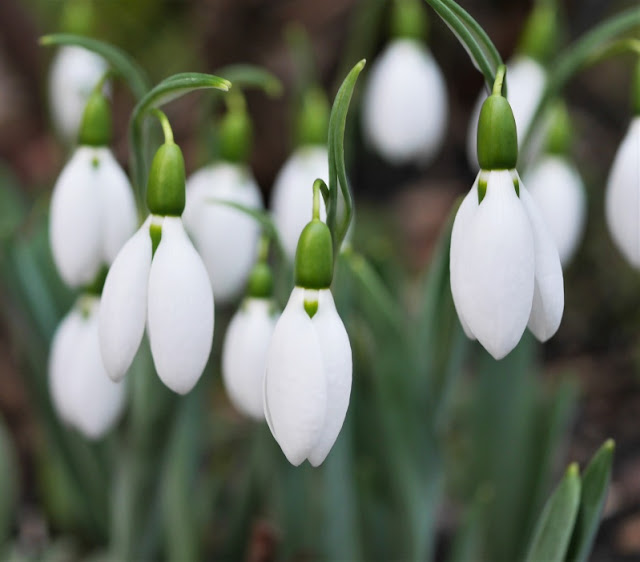 A winter garden is a subtle thing. There is a spare architecture of bare branches and geometric shapes. Rose bushes show their thorns on greenish stems. Brown sticks thrust upwards from a hydrangea's base, pale against the green cedar hedge. Bright emerald moss covers large patches of brown dirt. Now, in January, in our coastal climate, sharp, pointed leaves of bulbs planted months ago thrust their way upwards. A short excursion around the garden late in the afternoon revealed all kinds of growing things. Snowdrops, the first flowers, are so very welcome in the grey days. 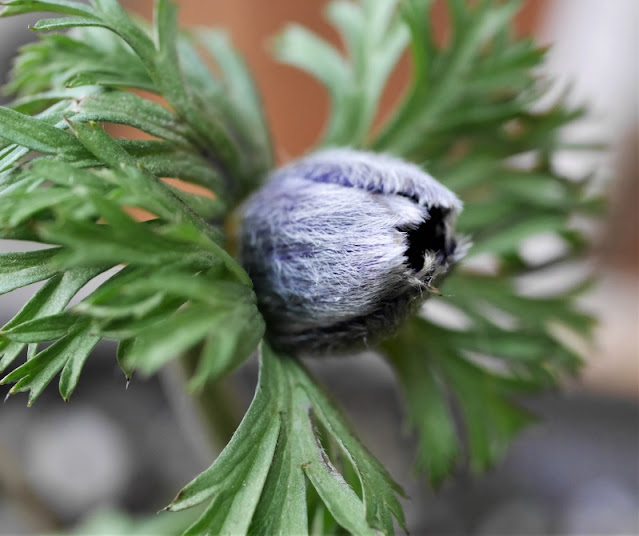 A small anemone flower forms in a pot where anemones settled on their own last year and seem to like it there, so they can stay. 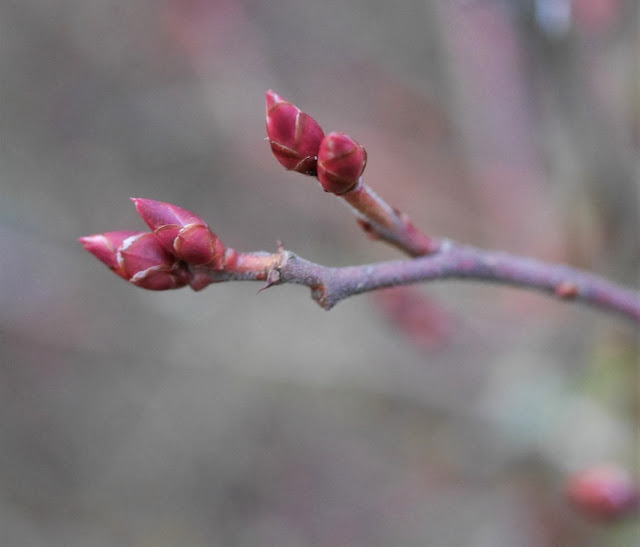 Tiny furled blueberry leaves make me smile, and remind me that it's high time to get out there and prune a few things. A week or so ago I finally moved the peonies I'd planned to relocate last fall, and was thwarted by the incessant rain. I don't know how well they will do, but I did notice tiny red points among the tubers which I promptly covered up, but not too deeply. 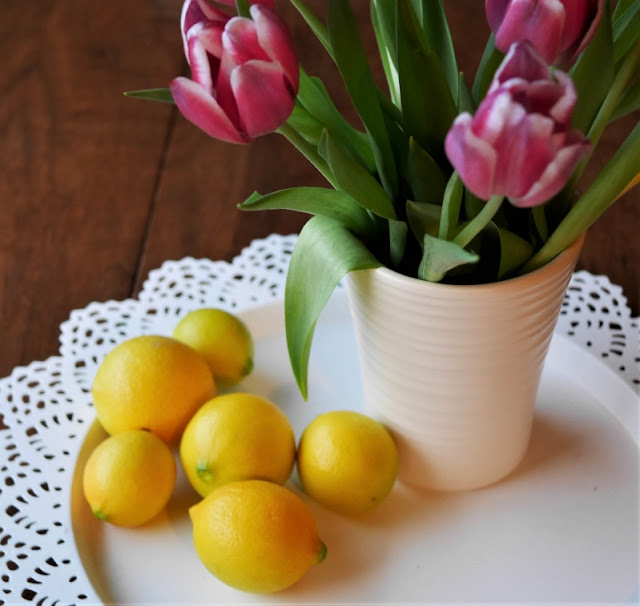 The lemon tree is tightly covered and a string of old fashioned Christmas lights winds through its little branches to keep it warm throughout the winter. On cold mornings we see the glow of the lights, attached to a thermostat, and know the temperature is near freezing. Yesterday, I peeked underneath the covering and reached in to pick these bright, little lemons. How good they smell! As well, there are small green fruits forming for summer picking. Lemon trees are amazing things - they can have flowers and fruit at the same time, and are self-pollinating under their winter covering. A little microcosm of the life cycle under wraps.
This lemon tree is our second, as we uncovered the first one too early in the spring and a cold snap took it away. We won't uncover this one until May. 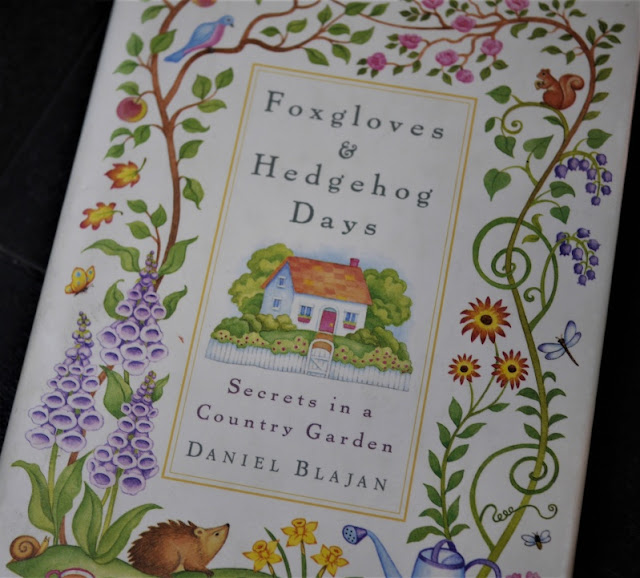 I read about this book on a blog (I don't remember which one), and added it to my list of want-to-reads. It wasn't available in the library, so I checked Russell Books, our local re-seller, and discovered they had a hardcover version in stock for a very reasonable five dollars.
Daniel Blajan features his garden and the creatures that live there. He's not a life-long gardener; the book was written after five years of moving from the city to the country. Detailed observation of his own garden combines with whimsy, dry humor, and a sense of awe to make for a delightful book to dip in and out of on grey January days. I'm including a small excerpt for you to enjoy:
"It was not yet dark, but the sun had already set and it was one of those rare, serene nights when you feel you could almost catch the light and hold it in your hand like a shimmering violet treasure. A perfect night for the flowers to dance...in the still of the night, the flowers of the evening primroses were coming to life. The pale yellow petals were unfolding one by one, flower after flower, like the wings of butterflies. They were unfolding at such speed that they caused the stems - yes, the whole plants - to tremble and quiver like a troupe of nervous ballerinas ready to jump on stage." 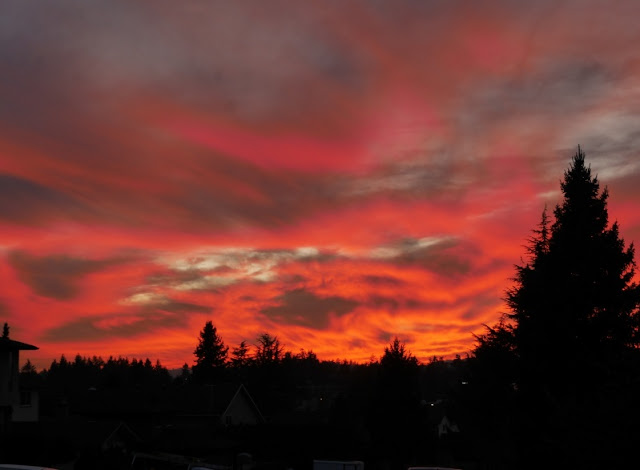 I'll leave you to dream about gardening with this photo of the sunset last evening. While cooking dinner, I look out to see intense colour in the sky, and rushed out in my stocking feet to admire it. It didn't last long, but how beautiful it was.

Email ThisBlogThis!Share to TwitterShare to FacebookShare to Pinterest
Labels: garden

What a sunset! The sky is so majestic, so deeply coloured, a work of God's hands for sure.
It is a joy to see the first tender little buds and shoots in the garden. My snowdrops have just crept out but there is not much else with the intense cold we are having.

That sunset was amazing! I love seeing all of your winter garden pictures.

Just lost my comment....grrrrr. Anyway- Beautiful images and I am dreaming of gardening, too. xo Diana

That brief glimpse of the sunset colours is wonderful. Wish we could grow lemons here…

Oh wow! Your garden is coming alive. Mine is still buried under snow.

hostess of the humble bungalow said...

Oh a real lemon tree! I can imagine how wonderful it would be to pick them fresh from the tree!
We purchased an olive tree last summer and now I might see if we can get a lemon...you've inspired me!

How lovely to see sunset!
💗

A delightful book to have and to keep....

No budding here.... Ice and snow still cover all.... Sleeping in their deep winter home....

So much January beauty!! That sunset picture is amazing!

Gorgeous sunset. The excerpt is delightful.

What a stunning, vivid sunset! Great photo. The book has such an appealing cover, and reading the extract, I think I would like it too. Great bargain. It was so interesting to read how you keep the lemon tree going in Winter. We are new to lemon growing, and have a little crop of green lemons - crossing fingers they will know what to do next and turn yellow :)

Beautiful photos, Lorrie! And they definitely prompt that gardener's dreamwork you mentioned... though I'm not sure you said anything about *work*!

Lorrie - I am amazed that you have things to photograph in your garden! Mine is buried under a couple of feet of snow, still! I will admit to some dreaming about this summer's garden, though. I received a native plant seed catalog in the mail a couple of weeks ago, and have thumbed through it numerous times, pondering. Enjoy these days, as they lengthen slowly toward spring!

Look at those lemons! That sunset is something else, too. Beautiful photography!

Such a spectacular display of God's creation! Of course, no less spectacular is the opening of buds or points of leaves peeping up out of the cold ground!

Good morning, Lorrie. Your photo of the sunset is glorious. I am doing garden dreaming, but it will be quite a while before I can be out there. We have snow and ice. Also, I am doing garden worrying - about my lavender. It is supposed to be a variety that stands to bitter cold, we will see if Phenomenal really is Phenomenal. Enjoy your book - I loved it.

That sunset looks like the sky is on fire . . . amazing. I always find pleasure in viewing your photographs, you have a eye for the camera . . . your nature shots are so calming and lovely :)

Unknown said...
This comment has been removed by a blog administrator.
3:23 PM

A lovely post of lots of hopeful things. I’m intrigued how you over winter your lemon; I presume it’s in the garden. Like the look of that book. B x

Beautiful words and beautiful pictures, Lorrie. I can't see my garden from my house and at this time of year there is little incentive to wander out there but I think you have inspired me to go and have a look today. x

Stunning red sunset and beautiful snowdrops 💕 Nothing sprouts in Finland yet and we are expecting a heavy snowstorm over the weekend with 30 cm new snow. But I’ll be dreaming about the spring!

Ratana said...
This comment has been removed by a blog administrator.
5:51 PM

Delightful photos! And now I want to see if I can find that book at our library, :)

What a gorgeous sunset!
Love, love snowdrops in the garden. I just have a couple and hoping they multiply.
The crocus and daffodils are coming up and I am excited.
We did have a few lemons about a month ago on our trees, now hoping for more. Love your idea of the Christmas lights to keep them warm.

I love that idea of putting lights on the lemon tree to keep it warm!

What a treat to find the Daniel Blajan book for such a reasonable price! And it's such a lovely book too! Your lemons and tulip arrangement create such a joyful sight on this bitter, blustery day.

Oh my goodness!
That sunset is truly amazing.

What a stunning sunset photo! It looks like a painting.

Always exciting to see the B.C. flowers and plants. A "multi-day snowfall" is supposed to bring us 25-35 cm of snow later this week, so our plants aren't ready to pop up yet. 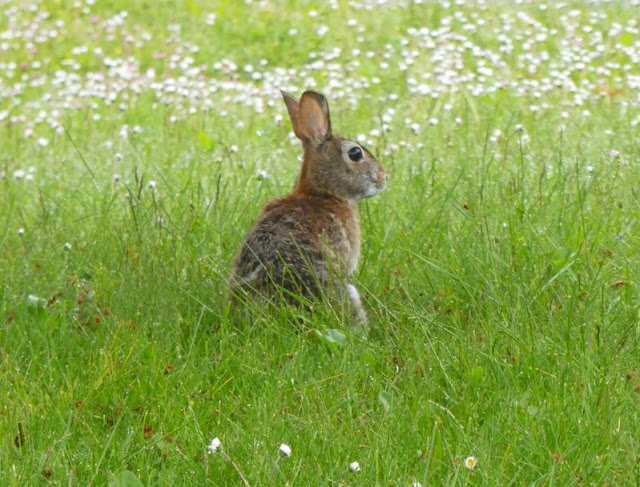